Hmmm despite saying I would try and blog more, it's been two months since I last wrote a post. I think the main reason is that quite often I just don't have the time to sit down and write something; once my working day starts there is mail order to catch up on and then editing for the magazine.............and then the day is gone!
So I think I might become an early morning blogger. I tend to get up quite early, usually thanks to the cat. And this seems to be the quiet time for me to sit down and think about 'stuff'. I often post to my personal blog at this time so my new resolution is to try and do the same for this blog!
I have a shipment that is ready to come over from the States but I want to bulk it out a bit with maybe some new waddings. Just trying to decide which one! I already stock Hobbs Heirloom and Polydown and was thinking of stocking something to compliment these. Do you have a favourite?
Unfortunately I have just had an order cancelled for some fabrics (that I've been using a lot recently).........because I didn't order them from the official European distributor. Nice to see a free market economy working there? So I guess I will have to re-order them from the official source.............

The next post might just have something interesting to say, including an update on my machine quilting skills! 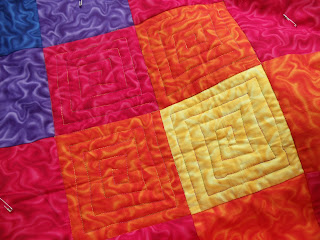 Joanna
UK
I am the owner of The Crafty Quilter, an online quilt shop. Check out my blog for the latest fabrics and products available online through my website and my eBay store.